Each obstacle is an opportunity to level up...

We understand this in the realm of digital reality... (video games)

Most of us are failing to apply this in real life

Those who do are very easy to spot in the crowd

They are the most successful individuals among their peers

🔥The unexpected consequence of too much sitting 🔥

The negatives of a sedentary lifestyle are widely known❗️

One issue that doesn't get mentioned enough is GLUTEAL AMNESIA, also known as the "dead butt syndrome".

This is the kind of stuff you need to see in your Twitter feed. Dump all the negative stuff that is only pissing you off and increasing stress.

Reprogram the Mind for Success

Beyond voting, not much you do changes anything

It’s going to survive one way or another, but you might not

Worry about what you control

If this year hasn't convinced you that you need MULTIPLE streams of income... I don't know what will. 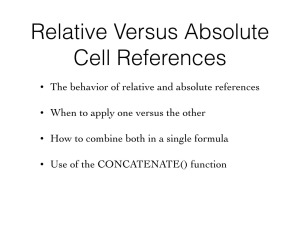 This video is part of the series titled: Price Catalog Mini Project. This series lays the foundations for the full-scale price catalog project.

Topics covered in this series:

One thought on “Cell References Relative Versus Absolute”