Is everyone taking about the "Golden Cross" on the R2K today?

Were you impacted by this "glitch"?

Have you seen articles on #ChatGPT yet? Is this going to be just another AI novelty or something more?
Microsoft announces multibillion-dollar investment in ChatGPT-maker OpenAI @CNBC https://www.cnbc.com/2023/01/23/microsoft-announces-multibillion-dollar-investment-in-chatgpt-maker-openai.html?__source=iosappshare%7Ccom.apple.UIKit.activity.PostToTwitter

I didn’t bother reading the article. The pics are utterly amazing. https://www.smithsonianmag.com/science-nature/these-gorgeous-photos-capture-life-inside-drop-seawater-180981297/ 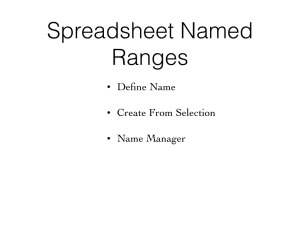 Examples of creating and modifying named ranges and using them in formulas. Named ranges are very useful in large projects. Especially when dealing with large amounts of data or data in various locations. Named Ranges help streamline your formulas. The proper use of Named Ranges help ensure the integrity of your data references.

This video uses the data model we created in part 1. You will learn how to use standard cell ranges before we dive into the main topic of Spreadsheet Named Ranges. The standard cell ranges are used as arguments for several functions which take an undefined number of arguments. These were covered in a video titled “5 Spreadsheet Formula Fundamentals“. Be sure to check that out first to get the most out of this tutorial.

Named ranges use absolute cell references by default. Be sure to watch part 1 to learn the difference between relative and absolute references.

This video is part of the series titled: Price Catalog Mini Project. This series lays the foundations for the full-scale price catalog project.